This is part four of a six-part email miniseries expanding on Baretz+Brunelle’s Where Will the Work Go? futurecast. If you have time to watch the whole thing, catch the video replay here. If you don’t, this listicle is a 2-minute read.

The B+B New Law Team can help you identify opportunities throughout your firm and build the kinds of legal service delivery models that clients are looking for.

When the last recession struck in 2007-2009, the world was a different place. Instagram didn’t exist and Russia’s involvement in the presidential race swirled mostly around the question of whether Sarah Palin could see it from her house. In the last dozen years forces of change have run rampant, and they have not spared the legal industry. As Baretz+Brunelle’s NewLaw practice co-head Brad Blickstein discussed on his futurecast, three of those changes in particular hold implications for the business of law firms going forward.

In “Where Will the Work Go?,” Brad explains that in past recessions, legal departments have sent more work to outside firms, only to pull it back in as the economy improves. Today, as in past cycles, we can expect law departments to lean on their outside providers. The difference is this: Even as recently as 2008, to most law firms, “outside providers” meant outside law firms. Now, in addition to law firms, multiple types of businesses provide legal services – most prominently, alternative legal services providers and offshore legal process outsourcing firms. In this recession, the first time, law firms will have to compete with ALSPs and LPOs for work coming out of legal departments.

CORPORATIONS HAVE PROFESSIONALIZED THE WAY THEY BUY LEGAL SERVICES.

The differences between 2008 and 2020 are stark on this front. Since Brad conducted his first Legal Department Operations Survey in 2008, corporate clients have professionalized their buying at a rapid rate. The share of ops personnel who say they manage the selection of counsel for particular matters (4% in 2008 vs. 36% in 2020) or negotiate rates with them (36% vs. 54%), for instance, has skyrocketed. Like the first trend, professionalized buying will continue to erode law firm relationships that don’t deliver value to legal departments. 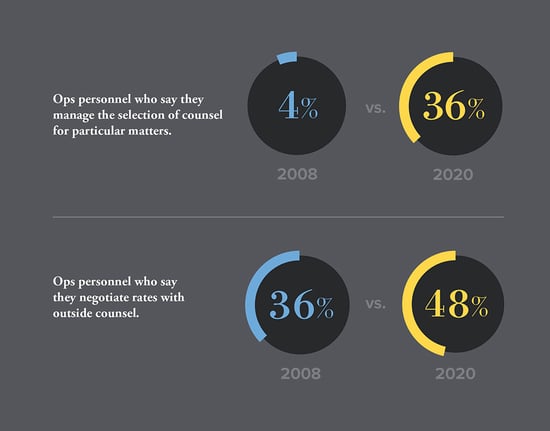 The recessionary cycle that we’ve entered is one indication that more work will be going from in-house departments to outside providers. In his presentation, Brad identified a second one. There is a long-term trend, he noted, in which large corporations are outsourcing everything other than their core business functions (building automobiles, making clothing, etc.). Law has remained the exception to this rule, but only because traditional law firm pricing is more expensive than bringing work in house. But that's not the only option anymore. As Brad said at the close of the futurecast, “You can do everyday legal work for less than your client can. Show them this, and you will not only win it, but you can keep it forever.”